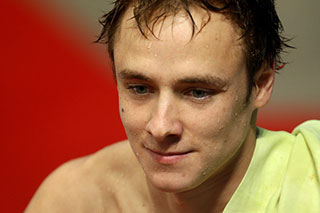 Favorite Sports Memory:
I have two favorite sports memories, first this years Gold medal Hockey game at the Olympics. I was in Miami watching the game and  I will never forget the feeling of excitement after Crosby scored the winning goal after 8 minutes of an overtime period that was far too stressful. I was so proud I wore my Canada national team shirts around for at least the next few weeks. My other favorite sporting memory was winning the Canada Cup international competition in Montreal in 2009. Standing on the top of the podium and hearing O’Canada will not be matched until I can do it again.

Favorite Quote:
The ultimate measure of a man is not where he stands in moments of comfort and convenience, but where he stands at times of challenge and controversy.
– Martin Luther King Jr., Strength to Love, 1963

CAN Fund Testimonial:
At the end of June 2010 I finished my university degree at the University of Miami. The four years I spent there were wonderful and I did well in school and also in diving. But much of the time I was not able to devote as much effort into diving as I would have liked, because of an extremely busy schedule trying to juggle school and being a high performance athlete. Shortly after finishing school I got married and now my wife an I are living in Montreal where we will stay until at least after the 2012 Olympics.  After I finished school I was originally planning on getting some work in Montreal to supplement my income as an athlete.  I had an extremely successful Commonwealth Games in Delhi and I can attribute part of that success to the fact that I have been able to devote more of my time and attention to training since I finished school and moved to Montreal.  With the funding that I have received from CAN Fund I will not have to split my attention and energy between diving and a job. I will be able to whole heartedly follow my dream for winning an Olympic medal.