Favorite Sports Memory: After hitting the wall at the Boston marathon it took every bit of my energy to keep going. I didn’t care about the time at that point, just wanted to finish, but I made it through to a world leading time for single leg amputee.

The moment you knew you wanted to represent Canada: Way back before I got involved in my sport I was passing through the airport wearing a Canada shirt and hat. The border guard asked me “are you on Team Canada or something” and I said “don’t I wish”. That’s when it became my dream.

CAN Fund Testimonial:  Competing at the highest level of any sport takes dedication, hard work and the ability to totally focus on training and techniques that make the difference between achieving a goal and a setback. Having support from CAN Fund will allow me to produce results every Canadian can be proud of.

Fun Facts:
When I switched over to sprinting from long distance I had to get a different running leg called the Cheetah.

I lit the cauldron in front of the Prime Minister at the Opening Ceremonies for the Winter 2010 Paralympic Games, it was one of the proudest moments of my life!
My kids kept asking me to go ice skating and I would tell them I couldn’t because I’m missing a leg. Finally I tried it and could skate. I missed out on 20 yrs of skating because I thought I couldn’t do it and didn’t try.

In 2008 about half way through a 15km race my leg went flying off while I was at full speed. Don’t ask me how, but I didn’t wipe out. The other racers were stunned. I hopped over to my leg, put it back on and took off like a bullet. I ended up finishing 4th in my class! 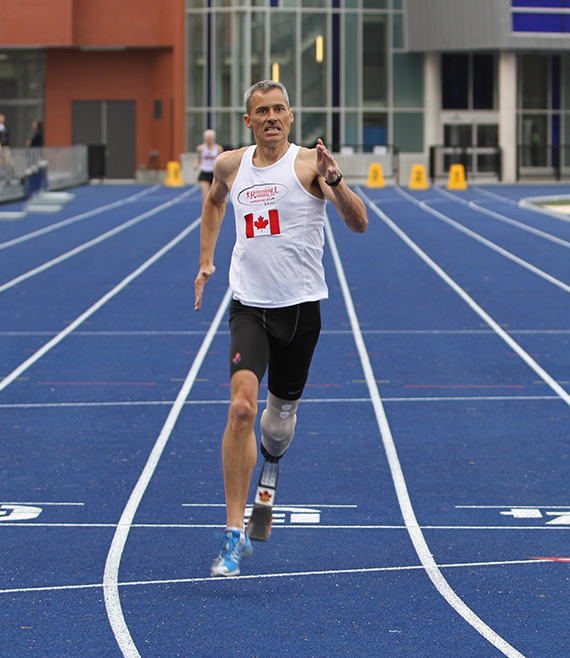