How does being a CAN Fund Recipient make a difference for you?
CAN Fund has allowed me to move away from my hometown of Okotoks, AB to come and train alongside other elite athletes at the state of the art Toronto Pan Am Sport Centre in Scarborough, ON. I am able to do this while also going to Centennial College in pursuit of an architectural technology degree.

Who is one person who has significantly impacted your life/journey? Tell us how they made a difference and share 3 words that describe who this person is to you.
My Mom – My Biggest Fan
I could not be where I am today if it were not for my mother. She was a huge part of my athletic journey growing up and driving me into Calgary several days a week ever since I was a young basketball player. After starting my career in rugby she continued to do so nearly every day of the week.

What is the biggest hurdle you have overcome to get to where you are today?
The biggest hurdle I have had to overcome in my life were my amputations at the age of ten. I had all of my fingers amputated as well as both legs below the knee. But that is also how I was introduced to adapted sport and how I have gotten to where I am today!

When was the moment you knew you wanted to represent Canada?
Ever since I was a young child I had wanted to be a professional athlete. I grew up in a family that watched a lot of hockey and had dreams of being in the NHL. However, seeing how I was a terrible skater I suppose it wasn’t the most realistic dream. After my amputation though, my goal was to get healthy as soon as possible so that I could get involved in sport again. Now I get to travel the world, playing a sport that I love and representing my country!

Best advice you have received?
The best advice I have ever received comes from my head coach before big games “hey kid, just go out there and have fun!”

If you were stranded on a dessert island what 3 things would you take with you?
Fishing Rod, Water Filter and Sunscreen.

What are your hobbies?
Drawing, Reading and Playing Video Games

What is your favourite movie?
Semi-Pro

What is your favourite tv series?
Community

What is the most played song on ipod?
Uptown Funk 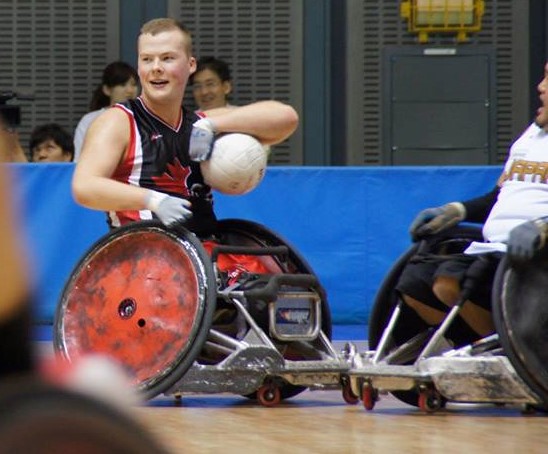